Loughcrew on the Summer Solstice

Ghislaine blessing the pipe bowl offering for the Mother

Last summer I was blessed to have taken three weeks and traveled to Ireland for healing, rest and to co-lead a pilgrimage.
My dear sister and friend, Eve Bruce, lives there now and drove like a  mad women on the small winding roads, with three other women as we sang, laughed and told stories of our lives.
After resting and hearing some awesome music in Doolin, we made it to the magical land of Newgrange, Tara and Loughcrew, also known as The Hill of the Hag.
This part of Ireland is filled with incredible layers of spiritual majesty. The land itself just breathes an ancient knowing that somehow opens the heart to something so wise, warm and filled with wonder.
I was totally wiped out the days before as I was still grieving the passing of my son and I had brought a bundle of his ashes to lay on the waters there. I knew, he would want that. I also had brought Guru Meher’s Beloved, Ghislaine 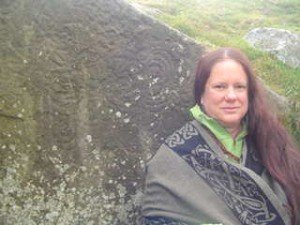 after the PIpe Ceremony

who is now my spirit daughter to share in the healing and our pilgrimage.
So, as we had dinner June 20th, talking about the Summer Solstice, they were all excited about getting up really early for the sunrise ceremony at Tara. The sun rises really early that time of day so I was like…you got to be kidding??I’ll just stay back and sleep!
We were in a restaurant that night and they all talked me into having a dessert and some special alcohol drink that I knew would take me over the edge ( and it did!). I went to bed exhausted and sick in my stomach with a headache.
Somehow, it was like some kind of power moved in my brain and body , when I heard the alarm at 4am I jumped out of bed and was filled with energy.
When we arrived at Tara we were sad to see it was ending, so we went up the hill and did our own prayers.
Then Eve and I decided that this was the time to go to Loughcrew. That this would be the place to pray with our sacred Pipes. The whole time we were about, we could not find the right place and time, but we heard the calling and we followed.
It was early. Too early for the keeper of the key to the gate to get into the sacred space under the earth mound, where for thousands of years people have prayed and done ceremony. So, we started to walk up the hill in the fog.
There were cows mooing and we were the only ones there, which I felt was such a gift.
When we got to the top there was a bench and as we caught or breaths ( it is a big hill to walk up), I could feel all the spirits and ancestors coming to be with us at that moment.
Eve showed us where the stone alter was to make offerings and we all came forward with so much respect and honoring of the moment.
Then we saw a circle of stones that we were able to sit in, fit in a cozy way and do our Pipe Ceremony.
There were five of us in the circle. Three pipes to share.
As we opened our bundles, and prayed with the spirits there I felt something so deep shift inside of my heart and soul. I could feel the energy from the White Buffalo Woman, known also as the White Calf Woman, surrounding us with Her power and blessings. It felt like, out of all the people on the Earth, at that moment, right on the Summer Solstice, that we had been chosen to pray in such a sacred way to honor the Great Mother, the Wise One, the Old Hag.
I somehow knew with my entire being that the death of my son and the devastation I had experienced until that moment, somehow was a portal for my soul to be re-born. That at that moment I knew in my cells and bones why I was there and the power of prayer, sisterhood and that sacred moment in time.
As soon as we were finished, it began to rain a gentle drizzle. We gathered out belongings and found our way down the hill ( I got lost in the mist!) and returned to Tara for the Water Ceremony at the Prayer Well of the Sacred Cow, who they see as the Healer.
Loughcrew. The memories are sealed in my heart and it actually took me most of the summer to deepen with the initiation we all experienced that morning, on the hill in the mist, with our hearts open in prayer for the transformation of our Mother Earth and all her children.
Thank you Mata.
And thank you Lynn, Jen, Ghi, and Eve.