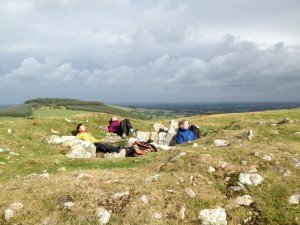 Basking in the sun. The new life!

We were in Ireland for our pilgrimage and visiting our last sacred site while in the Boyne. Each morning we would have breakfast, meet for some Celtic teachings and have our circle. This was our last day there and we were going to one of my favorite sites in Ireland, known as Loughcrew, the Hill of the Hag. When the tourist buses come they describe this sacred mound as a burial tomb. I know this place to be a home where ceremonies have been performed for thousands of years.
It is the home of the Calliach, known as The Bone Mother. We had our teachings, did a shamanic journey to her and we made a despocho, which is a prayer bundle. The Bone Mother is also known as the Wolf Mother. She is the spirit on the land who gathers all the grief and suffering from the land and she takes in into her cave as bones. There she sings the wailing song and transforms all the suffering so that new life can come forth. 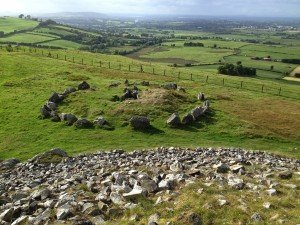 Top View after we sang and danced

The Calliach is a powerful force and at the same time, she is merciful and compassionate. I was feeling her working me that morning. In our sharing circle I spoke of my son’s third year memorial coming in a week and just felt the heaviness of the grief in my heart.
I knew this was a safe and very powerful place to bring this pain.
We made the despocho filled with our stories of our sadness, grief and places and people we knew who were in pain. We bundled it up and found our way to Loughcrew. As we were climbing the hill, it was cool and cloudy. A bus full of tourist arrived as soon as we got there and I was not too happy about it. I had this whole plan to go inside ( you need the key) to do a ceremony with candles. We ran up the hill to get there before all the old folks arrived and had a few moments inside. 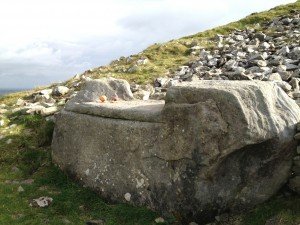 Inside Loughcrew is like going inside the womb of the Great Mother. I felt so blessed to be there with my three sisters, who I had shared deep experiences so far. We gave offerings, inside and outside and prayed, mostly in silence as the energy was so powerful.
Then, the tourist man came and insisted that we leave which was OK but it put me in a state of confusion. I could feel intense energy in my heart. I crawled out and waited until the folks
were going back down the hill. The four of us found a circle of stones right next to the Carin. Being in the open space was where we needed to do our ceremony. We all checked in and I could not hold back anymore. Marie, one of the pilgrims, told me it was OK to let go. I said I needed to scream and it all came out. I felt waves of grief. I wailed like a wolf. I became primal. It felt so freeing and with all the support of my sisters and the land, I let go even more. 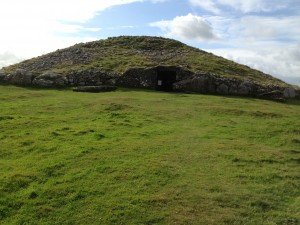 Black was transforming to light. Confusion and pain turning into openness and a deep sense of freedom. I had become the Bone Mother. When I came back to myself, we all had a good laugh and the sun came out. From there we made a fire and burned all the notes and prayers folks had sent to be transformed on the land. We laughed some more, prayed, sang some songs and found a place to bury the despocho.
It felt good to place it in the land, behind some stones, as this place was the stone home.  With the warmth of the sun, we celebrated new life, and being able to see with new eyes. Letting go is a true blessing. As we walked back to our car and the sun was setting, I found many hawthorn trees along the path. 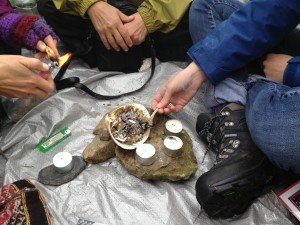 Offerings and burning the prayers

This plant medicine is used to strengthen the heart. I place a few clooties and prayed for forgiveness and prayers for my family and loved ones back home.
This was the “death”part of our journey. Brigid’s Well, which we went to the next day, was the Rebirth.
This is the shaman’s path.
I have realized being home now for a few weeks, that this felt like a completion of some karmic debt I had around Guru Meher’s passing and my ability to open my heart even more to love. I am glad to be back home in the Berkshires, and feel the mountains and trees connected to the land in Ireland. 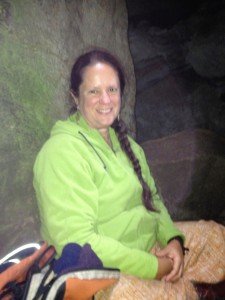